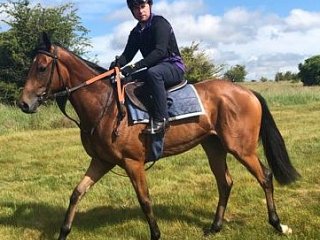 Eight time Dubai champion jockey Tadhg O'Shea is based in the UK for race riding in the coming months, and Denis has legged him up on three of his horses that have been entered since the resumption. He has also been a real asset in riding work up on the gallops to put some of the very promising Coakley charges through their paces. Tadhg is pictured here after riding work on a lovely two year old filly (as yet un-named) by Cable Bay out of a Sadler's Wells mare called La Concorde - and he confirms that she is a bit of a flier !!