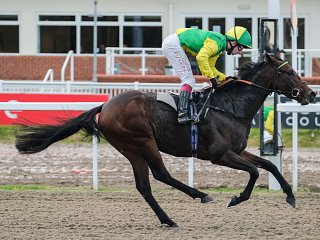 Two from the yard headed east to Essex to contest the first and last races on the Chelmsford City card. Sonnetina was understandably sent off favourite for the final race, but was stopped in her run forward from midfield at a critical moment, so that she couldn't carry enough speed off the last bend to close down on the leaders, and she was beaten under five lengths at the post. Also under Oisin Murphy, Eagles Dare really benefitted from the step up to ten furlongs and - not unexpectedly - gained his first win on his fifth start. Oisin had him breaking smartly and then held him in a clear air rail position towards the rear of the small field for three quarters of a mile. Last at the three pole he was then switched right approaching the two furlong mark, and Eagles Dare made rapid headway around the field to dispute for the lead on the outside line of four horses. Oisin straightened him and sent him on to finish strongly through the final furlong and by the winning line he had eased clear to win three and a half lengths and going away - which augurs well for middle distance prospects in future. Oisin really liked him and feels that he will improve for this and has the scope for plenty more wins too!