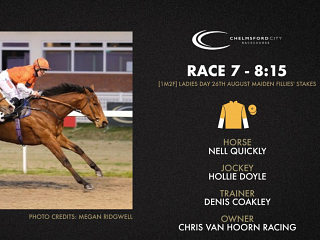 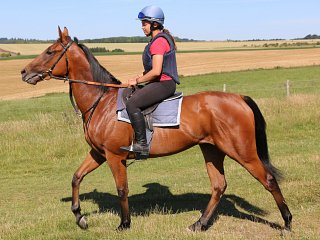 Connections were delighted with the very good performance of Chris van Hoorn's filly by The Gurkha, Nell Quickly, who confirmed the impression she had given on seasonal debut that she would really thrive by stepping up in trip, and she cosily saw off a field of fillies from top yards to break her maiden tag with a nice win under Hollie Doyle. At Wolverhampton she had completed each of the final two furlongs in quick time, and an additional three hundred yards around the Essex track held no fears for connections yesterday evening in the Ladies Day 26th August Maiden Fillies' Stakes. Hollie broke smartly from a middle draw and allowed others to lead her through a very steady mile, tracking closely in third. She then went second to challenge from the top of the straight and take the lead on an inside line by the last half furlong, easing half a length clear at the post. Once again Nell Quickly lived up to her name in the manner of finishing off her race, and she has some exciting options for owner and trainer to consider now for her three year old season. Hollie felt that she would be better still on turf and on a straighter track, since she won despite having to handle the tight turns around Chelmsford - she was very impressed by Nell and expects her to come on a lot for this run and become an exciting filly to go forward with.