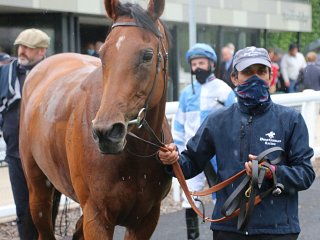 The fourth runner at Salisbury was Nell Quickly, strongly supported into favouritism for the Malaysia Filles Handicap, the feature race on yesterday's card. Under a great ride from Hollie Doyle she waited until three furlongs out before making her move through the small field. She made rapid headway into the final quarter mile, duelling with Godolphin's Deep Snow making a strong outside challenge under Oisin, Nell and Hollie ultimately got the better of a prolonged battle to see the orange silks of Chris Van Hoorn hold off the all blue challenge, extending to a half a length victory at the line. This really maintains the progression of Nell Quickly and underlines her ability to battle in a race, as she had shown at Sandown last time out. Now there is the prospect of more to come from the talented filly - pictured in the winners enclosure once again.